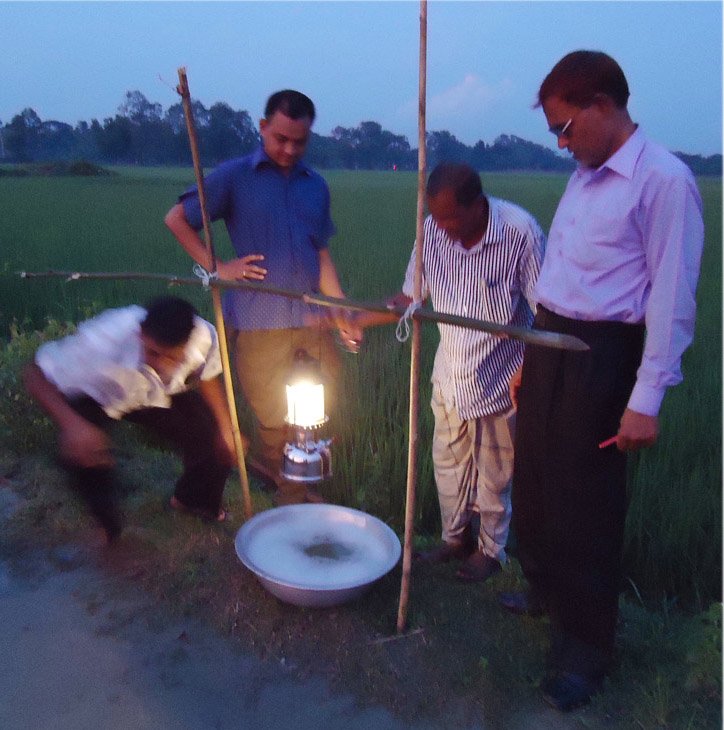 Light-trap, an environment-friendly method to detect harmful insects is helping hundreds of farmers in different areas of the district during this ongoing aman season. The farmers are getting benefits from this technology and they are very enthusiastic to use it, said Department of Agriculture Extension (DAE) officials here.

The  DAE sources said, they have taken the  programme throughout the district with a view to detecting the harmful insects in the aman fields and  to use the insecticides accordingly to save the crops. The very low-cost  technology is also helpful for the ecological balance, said the officials.

Around 2625 light-traps have already been set up at 525 blocks in 12 upazilas of the district.

Narayan Chandra Basak, Deputy Director of DAE told this correspondent that light- trap programme has been implementing in the district for last few years to help the farmers to manage pest effectively with low-cost. This year we gave more emphasis on the programme, he said.

Over 2,58,955 hectares of land  were brought  under aman cultivation in the district this year. This technology has reduced use of indiscriminate pesticides to nearly 50 percent as farmers’ response to this technology, said the deputy director.

The farmers are also learning about the harmful and useful insects through this  technology and such identification is much needed for maintaining ecological balance, added the official.

I visited the method at the field level and it has got very positive response from the farmers’ side, said the official.

The technology is easy to handle, so the farmers can carry it from one field to another round the season according to their need, sources said.

The DAE sources said, they set up the light-traps at night using traditional lights, charger light or electric bulbs and  a pot with detergent or kerosene mixed clear water  and the pot is  put under the lights to draw the insects. The insects fall into the water  kept in the pot and thus the existence of harmful and beneficial insects in the field is identified, said sources.

Sources also informed that if existence  of harmful insects is found, agricultural experts render necessary advices to the farmers.

Contacted, Mahbubul Alam, Muktagacha Upazila Agriculture officer said, no harmful insects have  been detected in the upazila so far. He observed that light- trap technology is saving the aman filed from harmful insects and helping the farmers to learn about an environment friendly technology as well.

He also said , this programme  has been implementing  in  45 blocks in 10 unions of the upazila. This technology would take positive impact in the field of agriculture benefiting farmers, hoped the official.

Hazrat Ali, a farmer of village Kandinau of Kumargata union in Muktagacha said, he was acquainted with the technology for the first time this year and he attained  knowledge for operating the technology to detect harmful insects.

This technology  will encourage the farmers and it will boost aman production, hoped Hazrat Ali. The light-trap  method has inspired hundreds of farmers of the district in last couple of years and many farmers have been successfully using the nature friendly technology to detect the harmful and beneficial insects, needed to reap a good harvest, said Mohammad Abdul Hannan, Sadar Upazila Agriculture Officer.